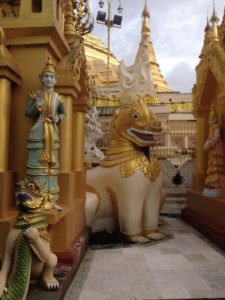 Sometimes the most powerful lessons are learned in rather unexpected ways. As I prepared for my journey to Myanmar (Burma) in the summer of 2016, I did not know what to expect, but caught myself focusing on things like what I would eat and packing enough Deet laden insect repellent to arm myself against the tiny biting mosquito demons. I received a scholarship from the University of Texas South Asia Institute to travel with GEEO Tours on a two week tour of Myanmar. Having never traveled beyond the Western world, I was eager to learn about Buddhist custom and the art and architecture associated with religion and ritual in Myanmar. Of course, I experienced all of these things (and so much more), but the one I will never forget relates to the generosity and unbreakable spirit of the Burmese people.

We were just returning to the city of Mandalay after an evening boat excursion on the Ayeyarwady River (Irrawaddy River). It was early evening and most of us were hot and hungry. We spent the day touring the regional pagodas, exploring Burmese food and culture, and learning about how the rainy season particularly affects the lifestyle of the region, particularly those who farm rice or live along the river bank. Many of these people were living in somewhat temporary housing along the new river’s edge since their regular homes and businesses were underwater. During the outing, our boat skipped past thatched rooftops peeking out of the muddy brown water. Some families used boats to access their flooded homes, though most were submerged beyond the point of reasonable entry. 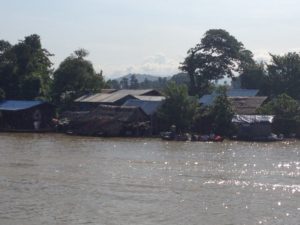 One of the things that struck me early on the trip was the amount of trash lining the streets, particularly in and along the banks of waterways.  What seemed to me like an ocean of food debris, plastic water bottles, soda cans and more covered many roadsides, empty lots and rivers. Football fields of trash floated along the top of the water near the shore while the locals simply ignored this and carried on with their daily lives. 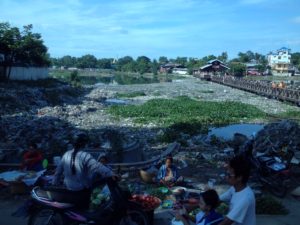 As our boat pulled into the makeshift dock at the end of our tour, piles of litter and debris scattered to make way. While staring at the mess I noticed, just to the left of our landing area, a family leaving their hut for a bath in the river. When bathing in the river, men and women wear a longyi (traditional Burmese clothing that is basically a large piece of fabric turned into a wrap skirt). They are a very modest culture, so while bathing, nothing is visible, other than that not typically covered by clothing. I don’t have a picture because it is considered inappropriate to photograph a person who is bathing (obviously), but on occasion this can be harder than you may expect, which is perhaps why the Myanmar Ministry of Hotels and Tourism included a reminder in this guide for tourists.

One of the women in the bathing group waded into the muddy water rather enthusiastically, smiling and waving vigorously to our boat, welcoming us back to shore.  She splashed and waved and waved and splashed with one of the broadest, most genuine smiles I have ever seen, showing no concern for the dark brown of the water or the layers of trash surrounding her bathing area. Many of us did a double take as she brushed her teeth, using the river as a water source. 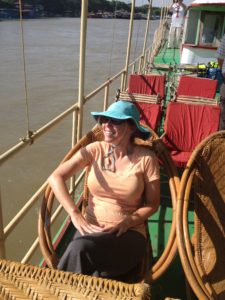 It was at this moment that her smiling face cemented into my memory. Our group must have seemed rather entitled sitting on our boat beneath our sun hats and twelve layers of SPF 70, sipping bottled water and Coca Cola. And yet this woman did not look at us with scorn, jealousy or contempt. She smiled and welcomed us.  Perhaps she welcomed our American dollars, which may have fed her family that month (due to the hut’s proximity to the dock we suspect it may be her family’s business). Perhaps. Regardless, she welcomed us. She did not see any flaw in her lifestyle or the water in which she bathed, and I was forced to ask myself: “Why did I?”

I will always remember her kind eyes, her genuine smile and her contentment. We often forget just how much we have to be thankful for – this woman reminded me that joy doesn’t come from things. Even though she and I never spoke, we built a thousand bridges between a simple smile and a wave.