I am checked in and waiting to board the plane for my first flight and I am SO excited the adventure has officially begun! I will stop briefly in Dallas and then hop the LONG flight to Buenos Aires, Argentina. Several students asked how long it takes to get to Antarctica from Austin, and according to my itinerary it will take about three days: the Explorer is expected to reach Antarctica on Saturday, December 31 – what an awesome New Year’s treat! There are probably faster ways to reach the legendary White Continent, but we are going to take a little time to explore Buenos Aires tomorrow and then will fly over Patagonia to Ushuaia, Argentina (capital of Tierra del Fuego) where we will meet the Explorer on Thursday.

As you all know, I am lost without a good book in my hands, so I am well prepared for the 10 hour and 24 minute flight from Dallas to Buenos Aires. 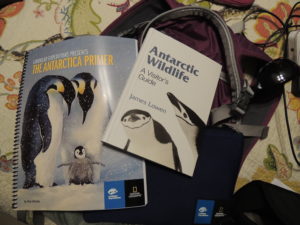 In addition to books to prepare me for my Antarctic adventure, my Kindle is loaded with a stack of new titles that may just be the next big thing in the Library. I am also finishing Lars-Eric Lindblad’s biography (1983), Passport to Anywhere: The Story of Lars-Eric Lindblad, who is considered the pioneer of adventure travel. The story begins with the exciting account of an Antarctic journey gone a bit awry, and then chronicles Lindblad’s life, both his successes and failures, as he paved the way for adventure minded tourists to visit some of the most remote and exquisite corners of the world. His enthusiasm for learning about the world by experiencing the world is contagious, and thanks to his book I now have a rather long “bucket list” of places to see and things to learn. If you are even remotely interested in travel, I highly recommend this title – you can even get an electronic copy for free on the Lindblad Expeditions website.

Lars-Eric Lindblad’s son, Sven-Olaf Lindblad, is the reason I have the opportunity to have this tremendous experience (and am able to share it with all of you). He created the Grosvenor Teacher Fellowship to honor his friend and colleague Gilbert M. Grosvenor, Chairman Emeritus National Geographic Society and Education Foundation Board.

Teachers and Librarians: There is still time to apply for a 2017 Grosvenor Teacher Fellowship. Applications close at 11:59 p.m. December 31, 2016. 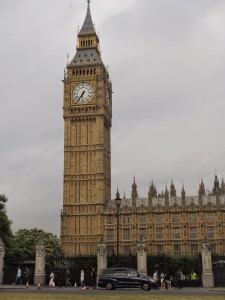 Big Ben, London, England – taken on a side trip to London during my Gilder-Lehrman Summer Teacher Seminar in 2014

Recently, there has been a surge of fairy-tale retellings in YA literature, and I think it offers an excellent opportunity for students to explore the originals. I find that most of my students are familiar with the stories of Cinderella, Sleeping Beauty, Alice in Wonderland, etc. but have not read them in their original format. Instead, the students are well versed in the various cinematic adaptations, particularly those of the Disney animated variety. These modern retellings provide an opportunity for teachers and librarians to expose students to the original texts and the authors who masterminded such intricate stories that linger in our canon today.

My Library copy of Peter Pan – it has lots of colorful illustrations, making it seem like a quick, easy read.

One of my favorites for this comparative adventure is Peter Pan by J.M. Barrie. There is literary magic in Pan’s whimsical character and his eternal youth as he is forever in the heart of a childhood adventure. However revisiting this familiar tale in its original form at an age slightly beyond Pan’s – mid to late teens, early adulthood, late adulthood – provides a different perspective on Pan’s actions. Sometimes we, as readers, lament not visiting the Neverland of our own, and other times we are shocked at Peter’s terrible behavior.

There are several retellings of Peter Pan, all adding something of their own to Barrie’s original, but today I would like to focus on a retelling from the perspective of Captain James Hook. 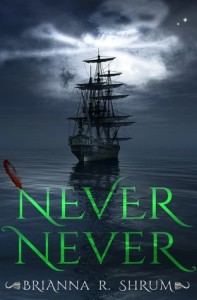 My favorite retelling of the Peter Pan story to date.

Everyone knows and loves the story of Peter Pan. In fact, I like to love Peter Pan himself, often forgiving the arrogance or flippancy of such a quintessential literary character. Brianna Shrum changes all of that with her beautiful exploration of the mind of Captain James Hook. He is all pirate for sure: vile, aggressive, savage. But in this version of our well known Neverland tale, he grows from boy to man; a tender man, capable of love, honor, leaving us wondering if what we have always believed about Peter is really true…

While violent and bloody (this is no Disney version) Shrum captures the essence of innocence and savagery of the young boy’s mind while also exploring what it means to become a man. Brilliant, but not for the faint of heart.

Audience: Grades 9 and Up

The obvious connection is a compare and contrast discussion/graphic organizer/activity of the main characters in Shrum’s story and J. M. Barrie’s original. This might be a nice way to explore the various interpretations of the Peter Pan and Hook characters over time. Of course, there are several film and theatric versions of the Peter Pan tale which would also offer additional depth to the exploration.

Display Ideas:
Create a display matching the original tales with one (or more) modern YA retellings. Here are a few ideas to get you started – I expect most YA collections already have these tiles. It’s also worth taking a moment to make sure that the collection has a copy of the original story in a format that is engaging to the reader. The Classics are indeed timeless, but the printed editions from the 1950s are not going to encourage our modern students to spend their weekends flipping through the dusty pages.

Alice in Wonderland & Through the Looking Glass by Lewis Carroll / Splintered by A.G. Howard (a Spirit of Texas High School Author – go here for programming ideas)

“Rapunzel” by the Grimm Brothers / Rapunzel by Paul O. Zelinsky, Grounded: The Adventures of Rapunzel by Megan Morrison, Cress by Marissa Meyer 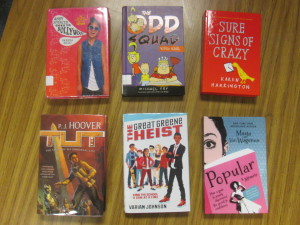 A selection of books by authors from the 2015 Spirit of Texas Reading Program Middle School List.

If you are not familiar with the Spirit of Texas Reading Program (SPOT), I highly encourage you to check out the program webpage for an array of creative programming resources, even if you are not from Texas. The program selects six authors annually at the middle school and high school level who are either from Texas, have lived in Texas, or write about Texas or Texans. While the relationship with Texas determines an author’s eligibility for the list, the lessons, resources, and activities do not necessarily relate to Texas and thus are a treasure trove for any librarian looking for engaging programming.

The 2016 authors were recently announced – you can check them out here:

As a member of the Spirit of Texas Middle School Committee, I can assure you that we work hard to provide a thorough resource package for each of the authors on the list including a passive program (one that it’s easy for students to do independently), an active program (like a library party or event), and a school program (linked to the Texas Essential Knowledge and Skills – TEKS – for a variety of subject areas). Again, all of the lessons and activities could easily be modified for libraries outside of Texas. You will also find book trailers, author videos and extensive resource lists/read-alike suggestions. The programming from past years is also available.

It’s an outstanding resource for any librarian looking for some inspiration and tools to introduce students to new books and authors and I highly recommend it.

The Spirit of Texas Reading Program is a part of the Texas Library Association Young Adult Round Table. I am currently serving on the SPOT Middle School Committee.

When considering my philosophy of teaching and learning, I immediately think of the IB Learner Profile. Teachers have the ability to change the world through the lives of the students they teach. This is not only an enormous responsibility, but also a tremendous honor. As educators, we must consistently model the attributes in order to instill them in our students and ensure they become responsible participants in the global community.

This philosophy is summarized nicely in Barbara Kerley’s highly acclaimed picture book The World is Waiting for You. Kerley’s photojournalistic style engages readers with limited text and brilliant pictures. It is through these vibrant photographs that she tells the story (which mirrors my teaching philosophy) that one must get out into the world and “Sift. Scrape…get your hands dirty,” in order to truly become an engaged learner (2013). The pages are filled with inquirers begging questions like “What’s waiting?” around a corner, on the other side of the mountain, or at the end of a long road. Risk-takers make the decision to “Poke around for a while… [and] See where the river takes [them]” as the underlying message permeates the text: hard work will pay off in time, though challenges will present themselves on the journey (2013). In each picture, children and adults are active, messy, adventurous, and experiencing the wonders the world has to offer. Not one of them is sitting in a desk, or even in a classroom. This array of rich experiences is the link between Kerley’s perspective and my philosophy. Learning happens as we explore relevant questions and seek out their answers, preferably in a hands-on manner.

In order to be an effective educator, I must demonstrate these attributes and serve as an example for lifelong learning. Students must see me act in a principled fashion, and respect the knowledge and wealth of experiences I bring to the lesson. As reflective learners, my students and I learn together, and evaluate our successes while also understanding that one cannot truly learn without first meeting failure. This failure is not in the sense of earning a grade, but as a part of the design process; we investigate, evaluate and re-design until we reach a conclusion or find a solution to the problem.

Finally, I believe that teachers must have a passion for both their subject and the learning process. I embrace education with enthusiasm in both my innovative lesson design, and my ability to create enriching interdisciplinary experiences. Learners must have ownership in their learning and the interdisciplinary platform provides an opportunity for all subject areas to work together in order to form a larger, global, understanding. While it is important for me to share my passion with my students, it is also important for me to serve as a campus leader and engage others in the ongoing inquiry process.

Kerley, Barbara. The World Is Waiting for You. Washington, DC: National Geographic, 2013. Print.

FTC Disclaimer: I own a self-purchased copy of this book and chose to review it without compensation from the publisher; all of my reviews reflect my personal opinion.